Seals are the easiest large sea mammal to see around the coast of Skye.  This short guide gives some information about them and where to see them.

Will I see seals on Skye?

Almost certainly.  One boat trip operator offers a full refund if you DON’T see seals on their trip.  Look out for large sausage shaped outlines on the skerries and half-tide rocks that are found all round the coast and then take a closer look – almost certainly a Common seal. 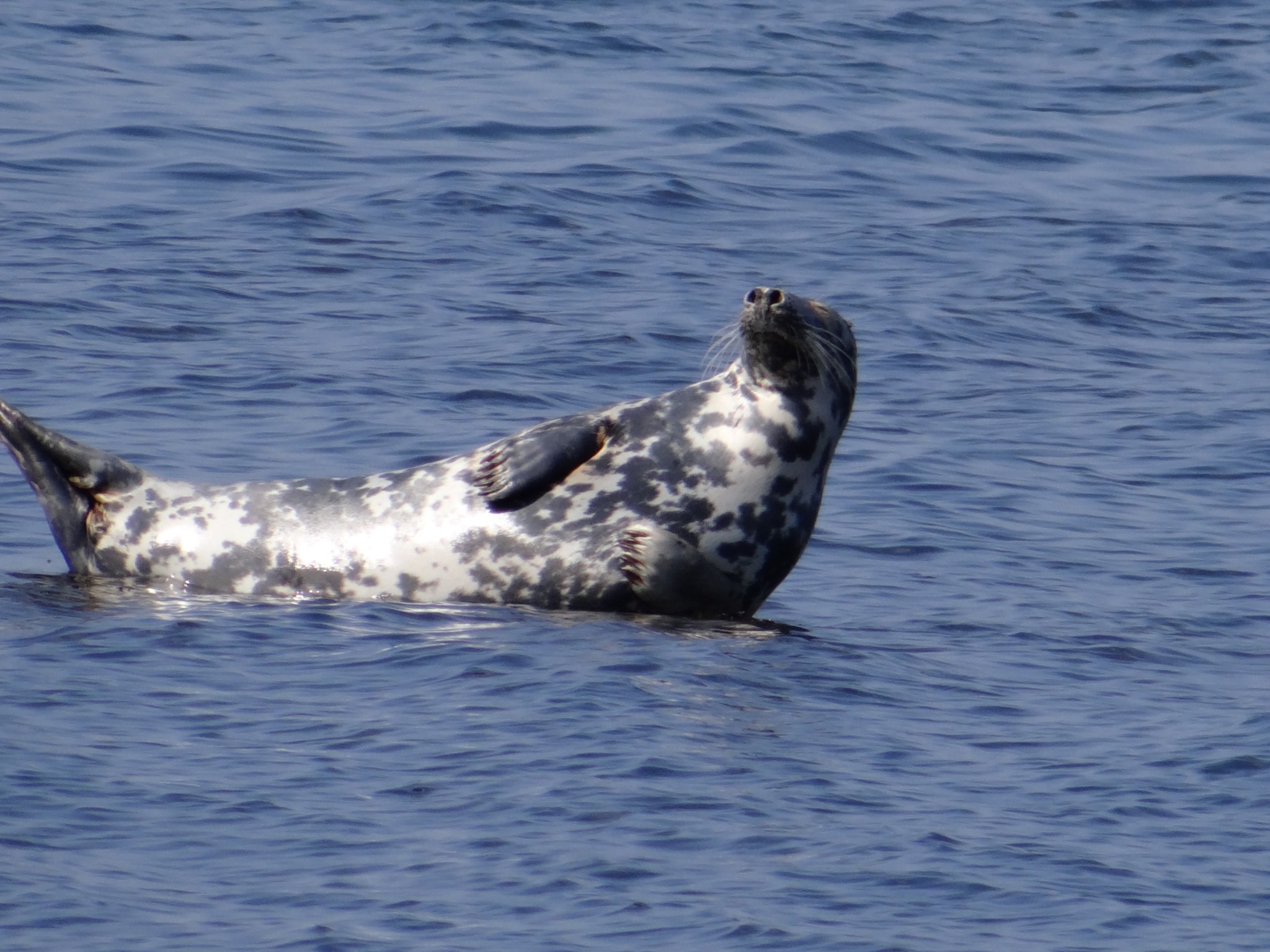 There is a second species, the Atlantic Grey seal, which also crops up round the coast of Skye but this is usually seen when “bottling” – floating at the surface with just its nose out of the water.  The facial profile of grey seals is quite different to the common seal and its most easily distinguished feature;  look for the noble, “roman nose” profile.

It is the common seal that has the adorable dog like face with eyes more evidently facing forward.  Don’t be fooled by colour variations common seals, when hauling out on the rocks between feeding sessions, the skin colour varies widely from brown looking to grey with white – it’s just the way they are.

For such big animals they can be very athletic.  Breeching – jumping clear out of the water – is not uncommon and a favourite activity of some of the friskier animals, although it may be something they do to spook their prey.

Common seals give birth to their young in June and do so round the coast of Skye.  Grey seals give birth in the late autumn and usually only do so on favoured, isolated islets further out on the West Coast, off the shores of the Outer Hebrides and on some of the more distant Atlantic outliers.

Where can I see seals near Elgol?

The biggest colony of common seals locally is on the islands near to Loch Coruisk and is best reached by taking one of the boat trips to Loch Coruisk from Elgol jetty.  Try Misty Isle Boat Trips or Bella Jane Boat Trips.  They usually get up quite close as the seals are well-used to them and stay put on their rocks, so, a great photo opportunity.

Another good sized colony hangs out on the shores of Strathaird Island.  The seals often swim in the channel between the island and the shore and can be very inquisitive.  The Island is reachable as part of the coastal walk from Elgol jetty round the tip of the Strathaird Peninsular.

There are some sizeable colonies of common seals nearby to Elgol, where our Springbank Cottage, our self catering holiday let, is located. We provide binoculars and a telescope as part of our environmental activities offer, so you can get a good close up look at these enchanting creatures.

So, if you are thinking about a trip to Skye and you want more than just a “standard” holiday cottage, take a closer look.  We hope you will be surprised by how much is on offer during a stay at Springbank Cottage.

Read what our guests think of Springbank

Find out more about Springbank Cottage

Find out where we are